Pinci - or pici, just depends where you are
Skip to content 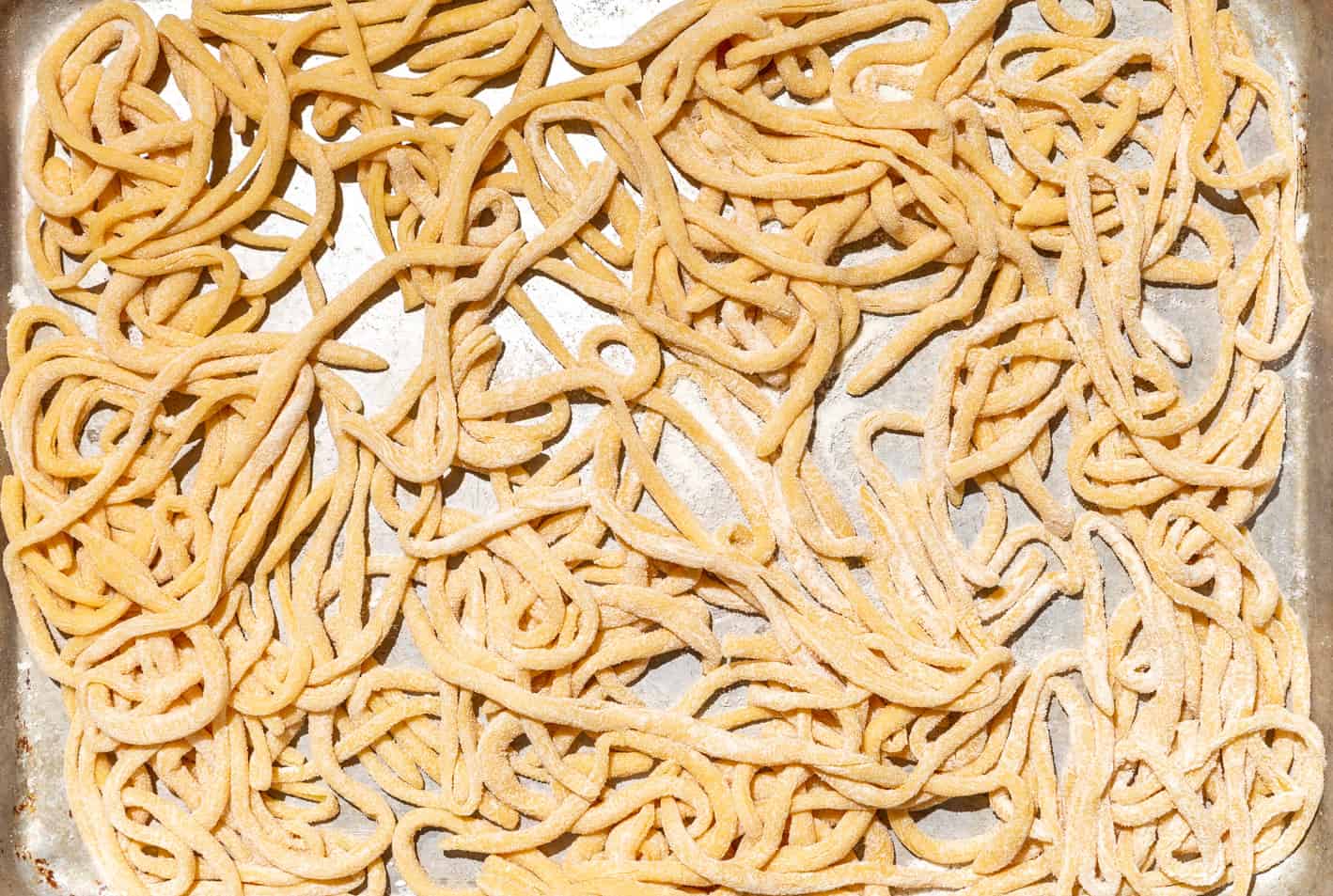 This summer I went on a family trip to Italy. We were primarily in Tuscany, so my first concern, other than the incredible Renaissance art and picturesque landscapes, was of course the food. Because that’s alway my first concern when I go anywhere. One of the more memorable places we went was Montalcino, and yes, it was because of the food. Not only did I have the best focaccia of my life there, but I was able to dine on some pinci.

It’s a fat, hand-rolled pasta, think thick spaghetti. It’s often called pici in neighboring towns throughout Siena, but since we were in Montalcino, it’s pinci. I would also like to add that we were in the land of Chianina cattle, so the sauce was a ragu. Obvi. It was one of the best things I ate the entire trip.

Ry loves when I get back from these trips, cause he’s the recipient of all my test runs in trying to recreate those more memorable dishes I ate while away. This was one of the first things I wanted to make. It was also a way for me to do a new version of one of my fave bolognese recipes. But we’ll get to the sauce in the next post.

I love pasta, we know, we know. I only say it in just about every other post, but I just want to reiterate, I love the stuff. These pinci were fairly simple to make, no special equipment needed, just a bit of patience. But if you’re going to make any fresh pasta, you most likely enjoy the process. And if you’re like me, you probably find the whole thing a bit meditative. It’s pretty much like playing with edible play-doh. 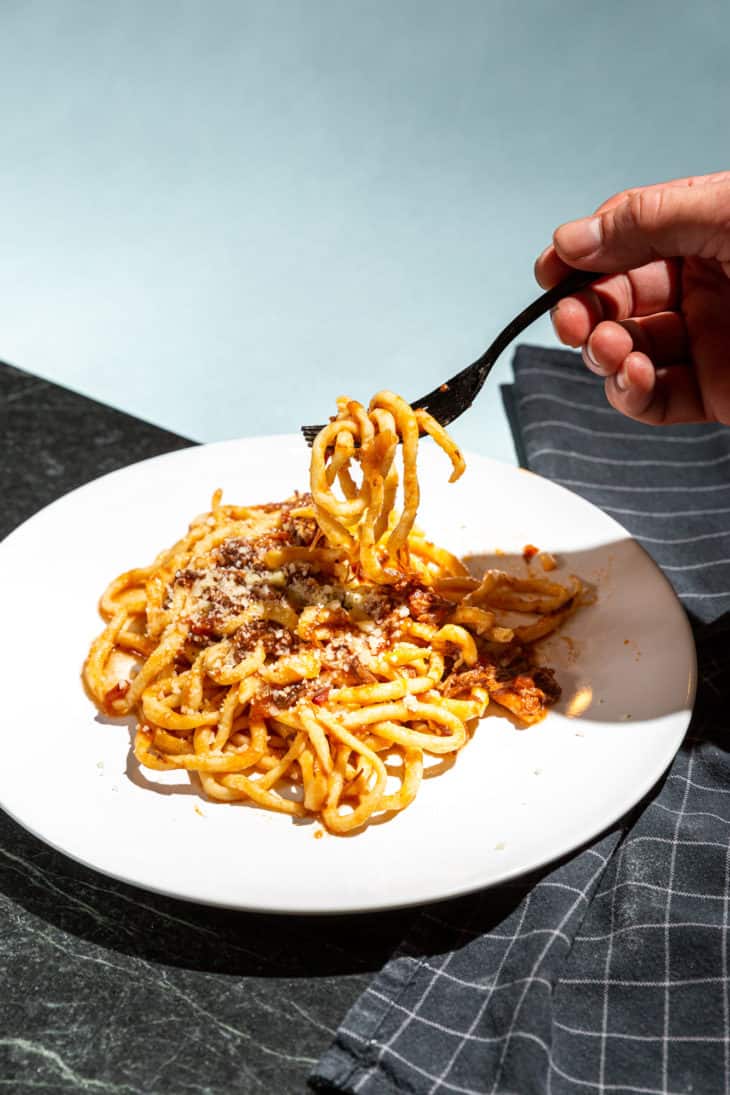 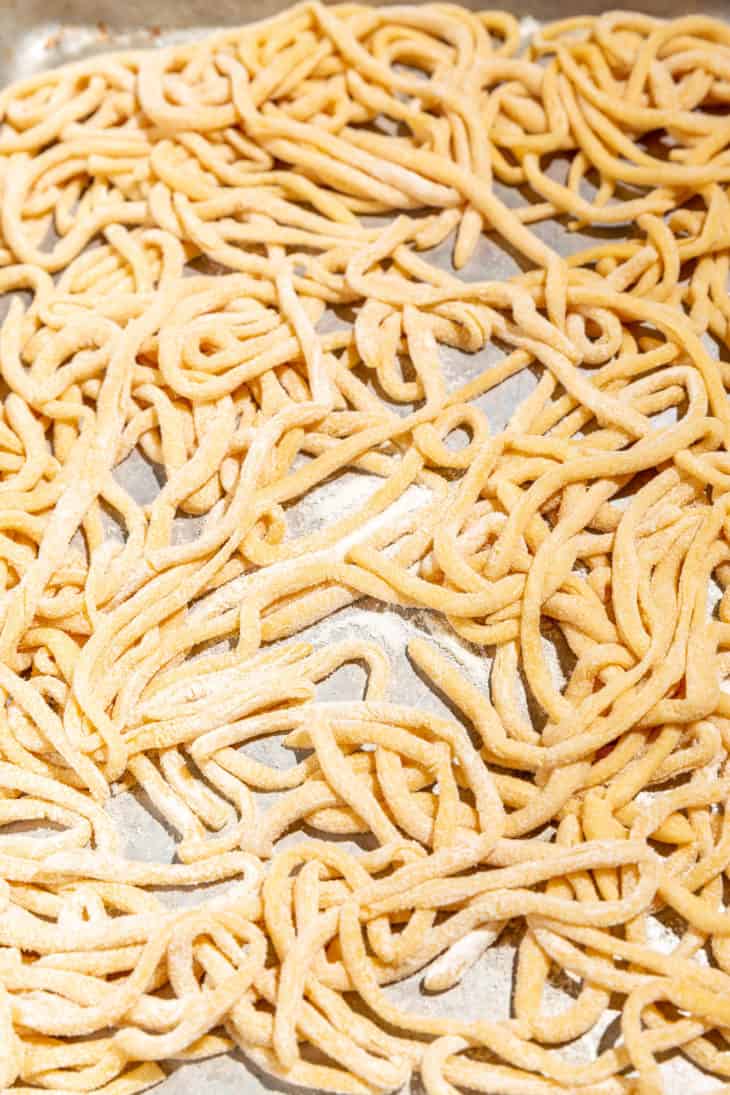 I love pasta, we know, we know. I only say it in just about every other post, but I just want to reiterate, I love the stuff. 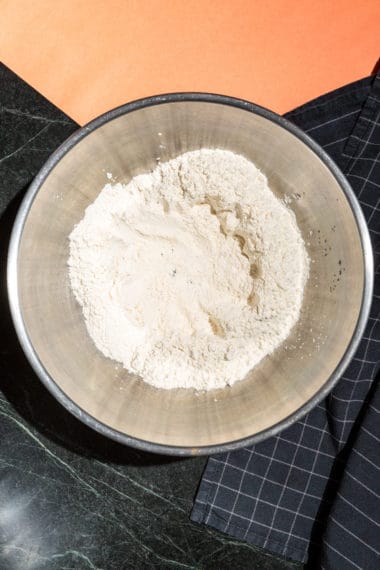 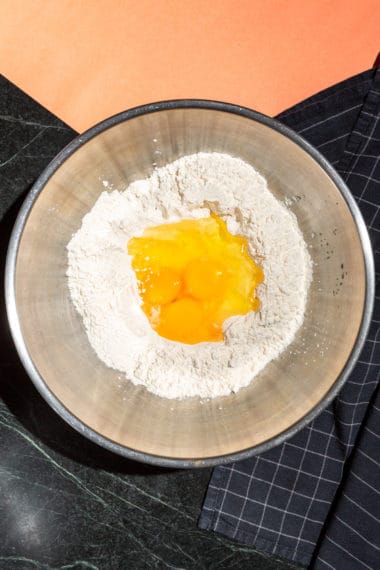 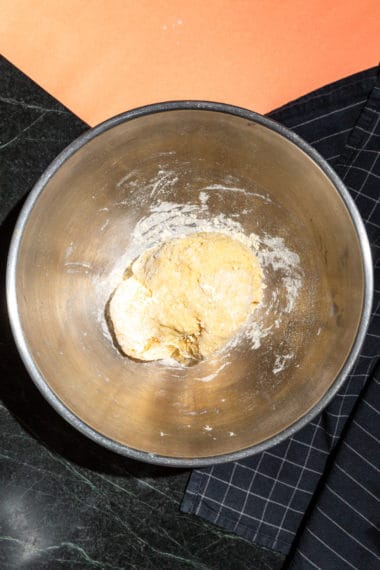 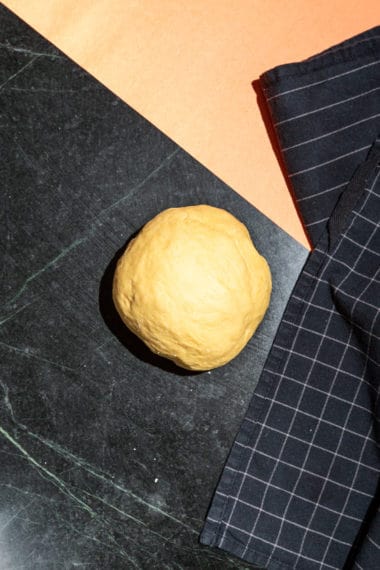 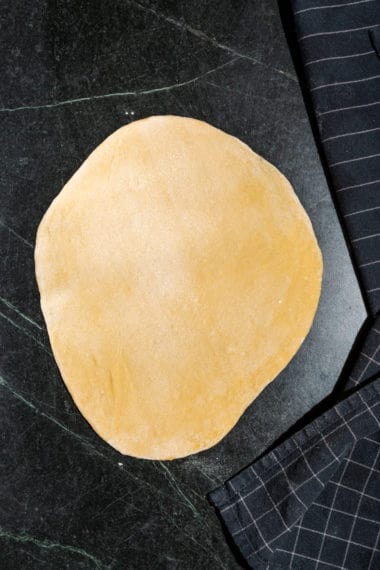 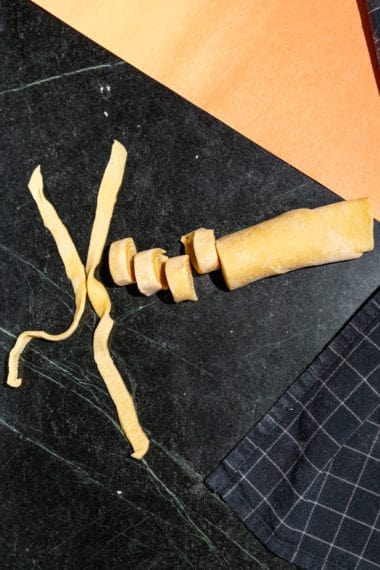 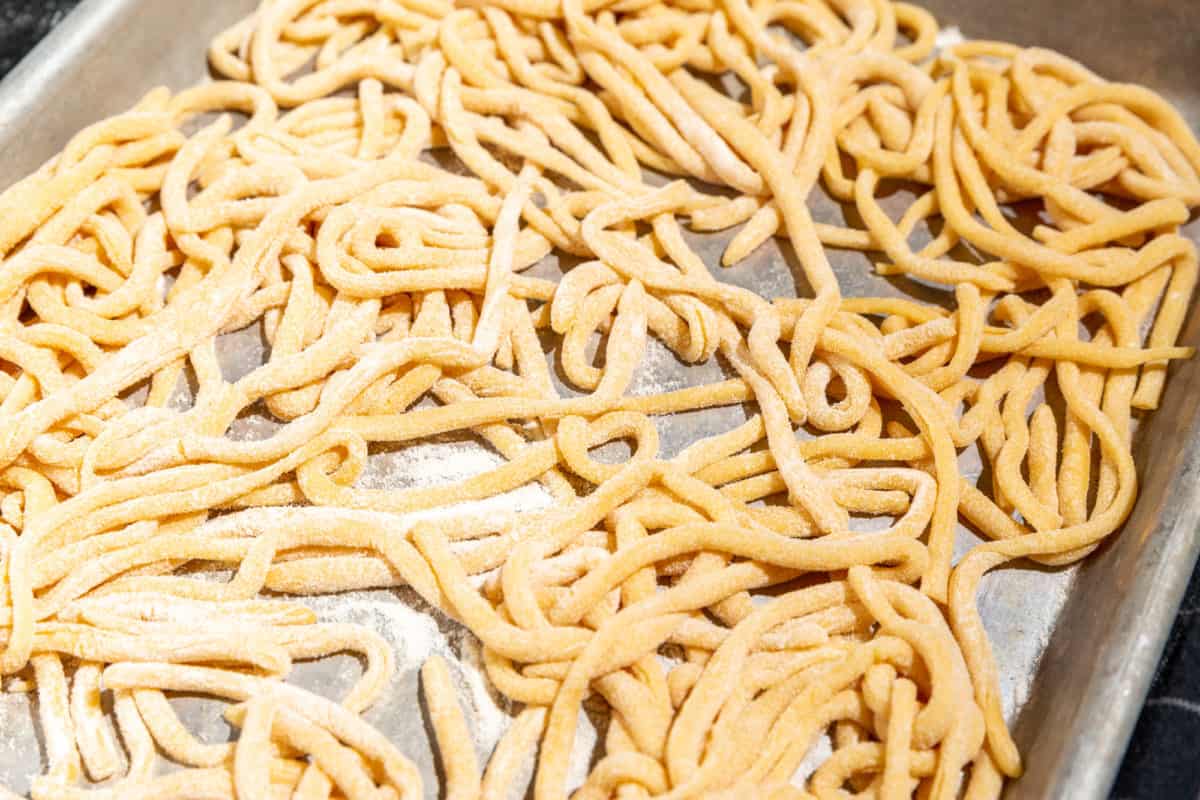 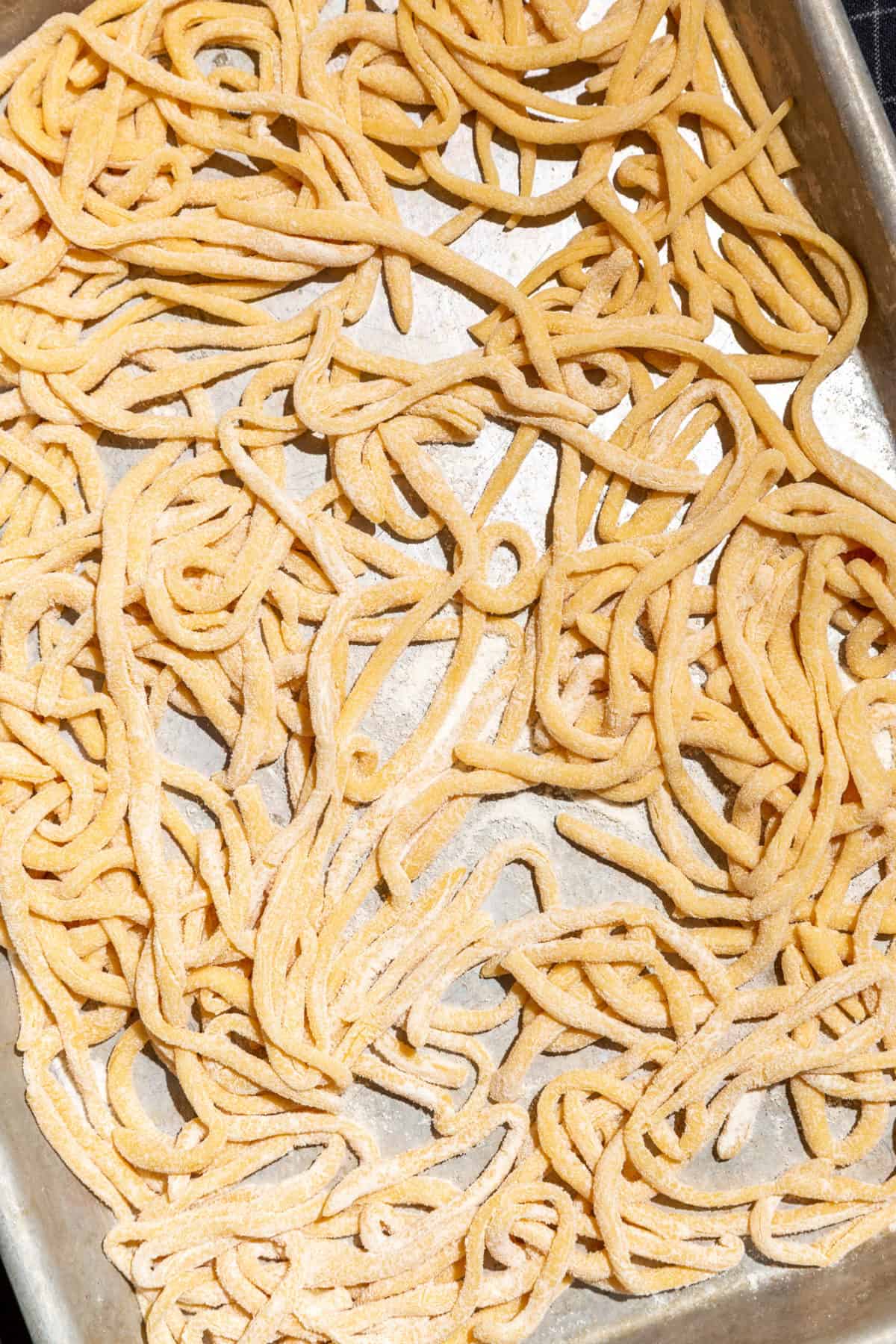 or pici, just depends where you are

Just a quick note: Pinci, or pici, recipes I looked at don’t always have egg in them, but I love an eggy pasta, so this version is with egg, rather than just water and flour.

Scale this up or down depending on how hungry you are and how many people you’re feeding. Go for 1 egg to 100g of flour, and keep in mind that usually 1 egg per person is a reasonable serving size. So for 3 people, which is what I made here, I used 3 eggs and 300g flour.

I like to do this in a bowl, because it makes less of a mess than doing it on my countertop, but if you like the romance of making a flour well on your counter and doing it that way, by all means, go ahead. I’m doing the same thing just in a bowl, you get it.

First thing, add your flour into a large bowl, make a well in the center to add in your eggs. Using a fork, or your hands, break up those eggs and start mixing them with the flour until everything is combined. You should end up with one big mass of rough looking dough.

Next up, flour your working surface, dump that dough out of the bowl and start kneading. You want it to get smooth and elastic, should only take maybe 8 mins. Then, wrap it in a kitchen towel, or some plastic wrap, and let it rest for about 30 mins.

Now we can start rolling out the pinci. Take a small handful of dough, a manageable size to work with, and roll it out to about 2-3mm thick. Lightly flour each side of your pasta sheet and then roll it up into a tube and make 1/4” slices to create what will look like a super thick tagliatelle. Take each strip you’ve just created and roll it between your palms to round it out. You want to create a shape like thick spaghetti, don’t worry about it being too perfect, you want it to have some irregularity and texture to it, it’ll help grip whatever sauce you’re making. Make sure to gently toss them in some more flour so they don’t stick, and let them rest on a tray, towel, plate, whatever you’ve got, while you get the rest of the dough shaped up into those pinci.

To cook these, add them to some well salted boiling water, and cook just till they have some bite to them. Like with all pasta, don’t overcook it till it becomes some gross mush. The cooking time will depend on how thick your pinci are, but just keep checking every minute or so.

You can also go ahead and freeze these if you’re not planing on eating them right away.

One thought on Pinci 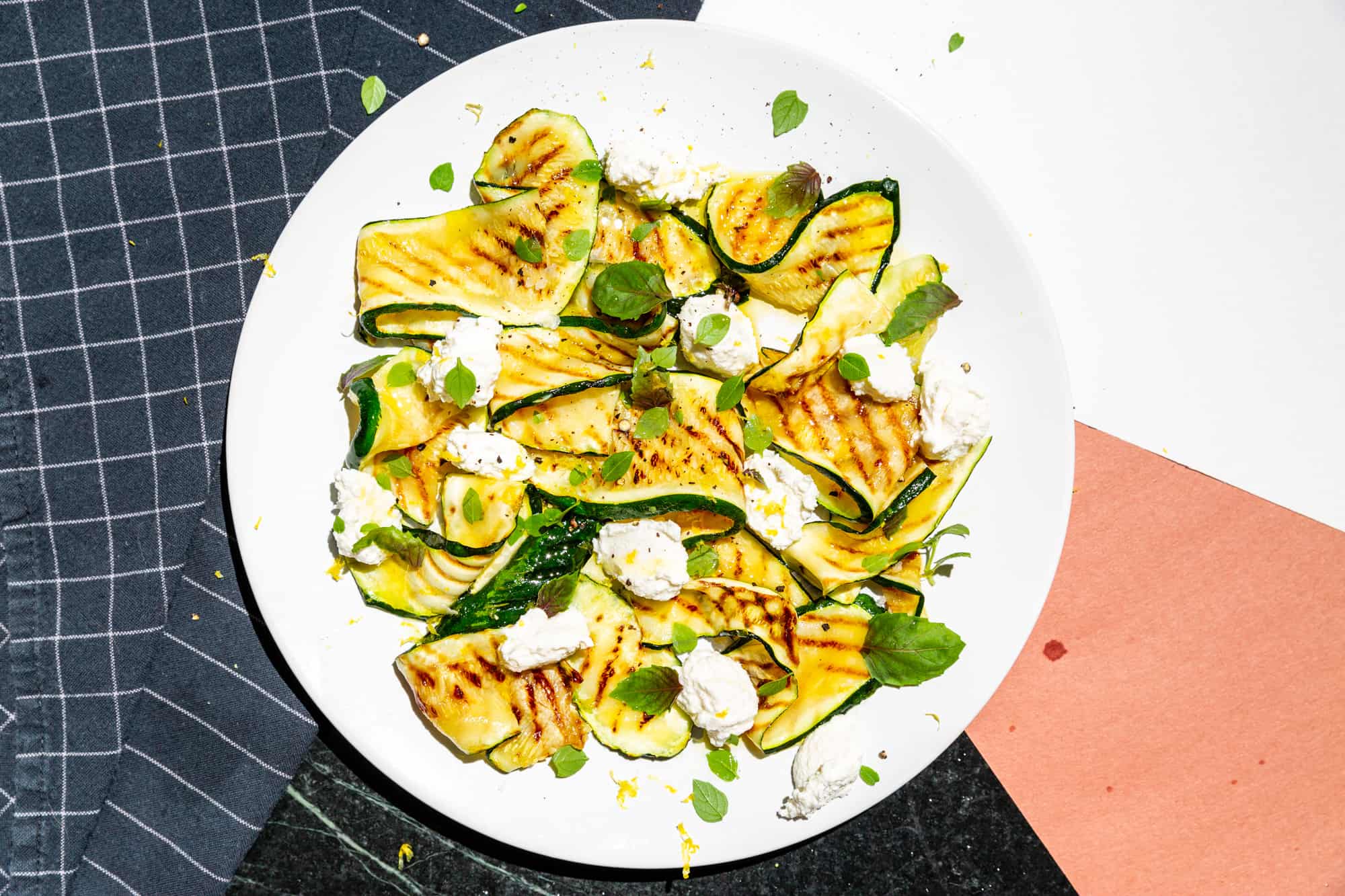 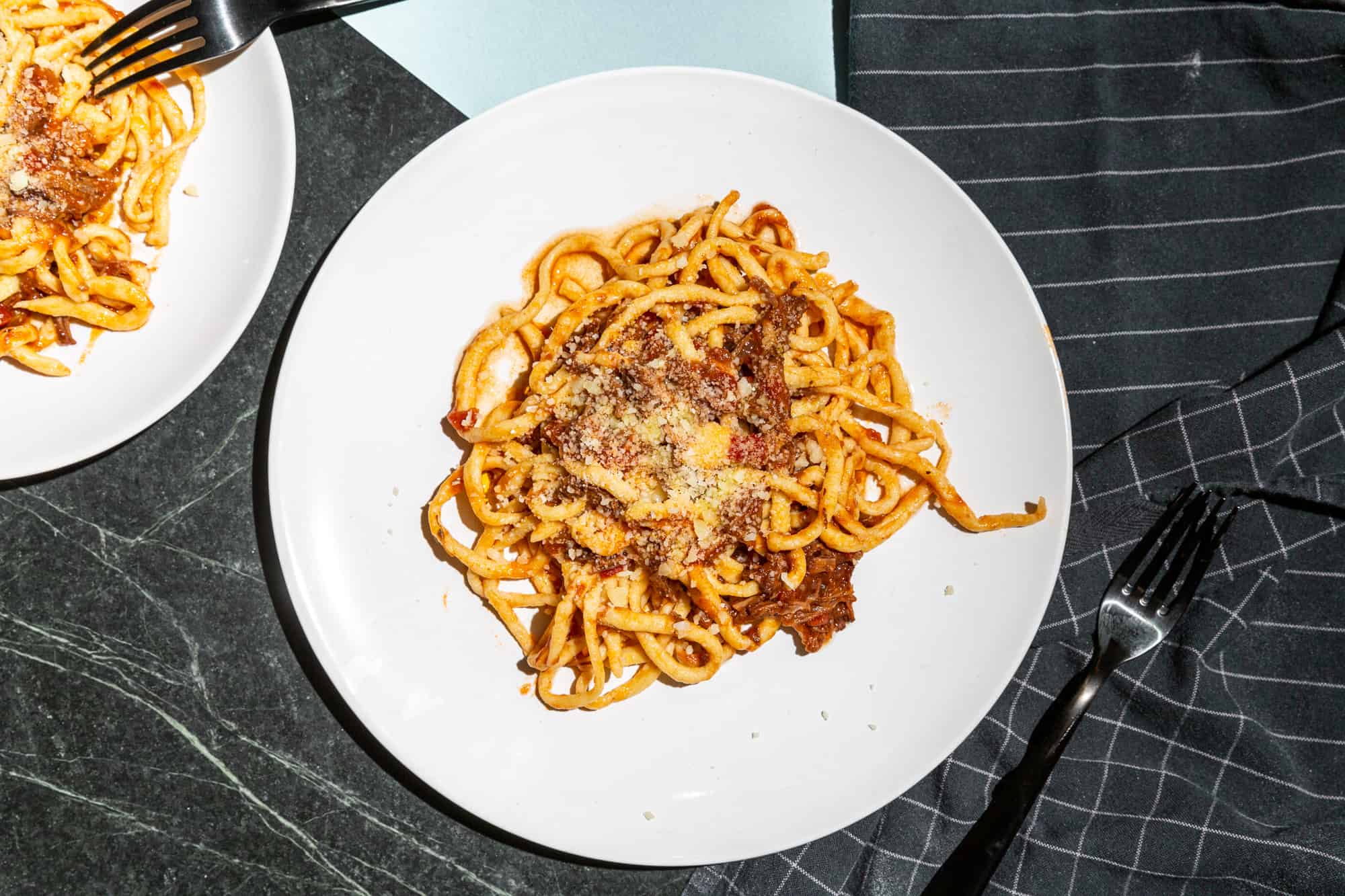