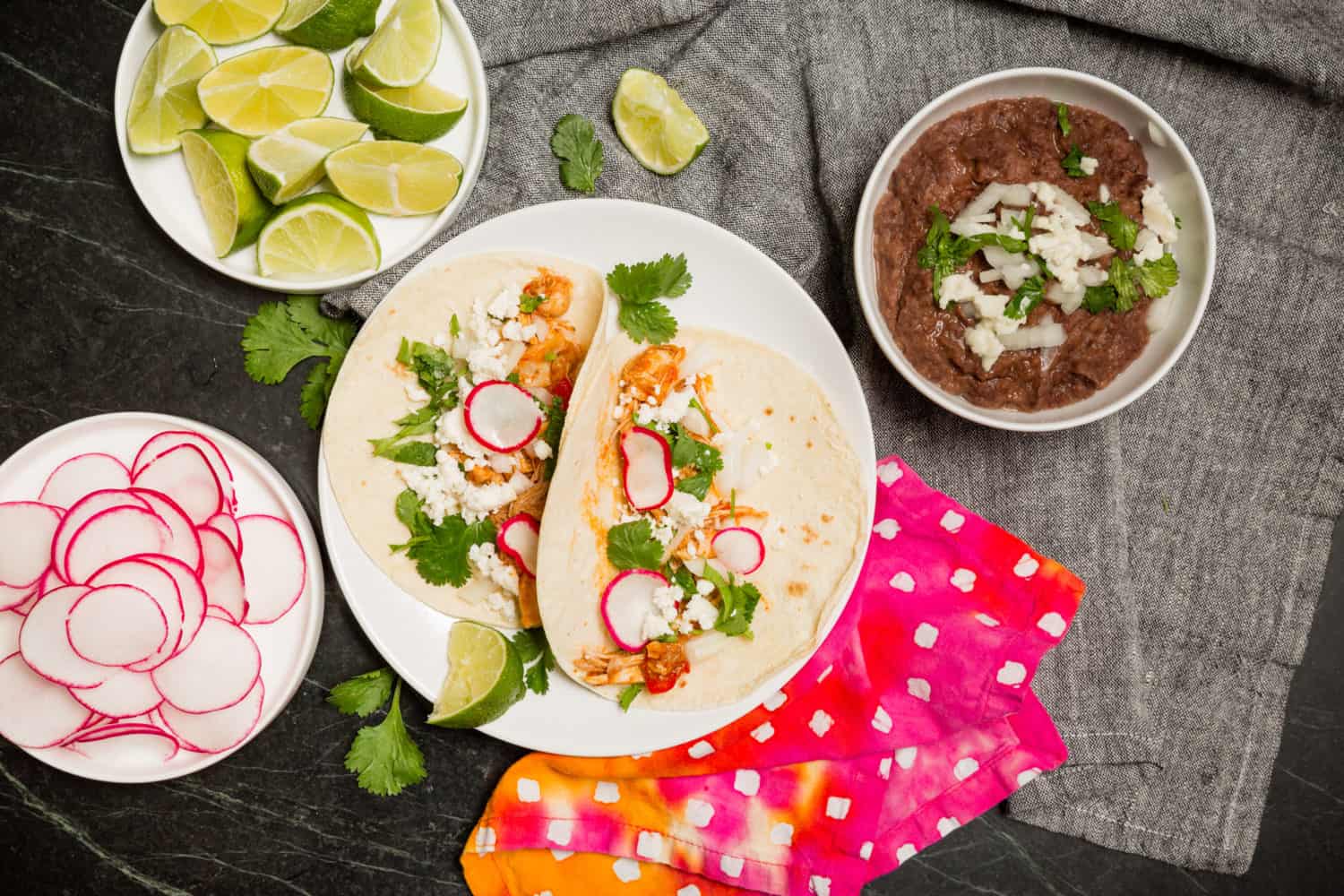 I love tacos, like LOVE them. So I typically like to make them at least once a week, more if Ry will humor me. This version is a particular favorite, not only because it’s super simple, but it’s so delish. It mainly consists of cooking some bone in chicken with some onions and sauce. The salsa I’m using here is from American Spoon, and if you haven’t had anything from them you are missing out.

I had never heard of American Spoon until my brother and sister-in-law sent Ry and I a big package with a bunch of their goodies for Christmas one year. And, now it’s literally the one thing we’ve been asking for every year afterwards. In one of the shipments they had a little insert with a bunch of recipes which looked good, and as soon as I tasted one of their salsas, I was set on making the tacos. I originally made the green chicken tacos using their roasted tomatillo salsa, I’ve also made grilled steak tacos with a habanero salsa and the one I did here is another favorite, braised chicken with pumpkin seed salsa. So good!

I do this all in a pressure cooker, mainly cause it’s quick on a weeknight. I typically cook it for about 20 minutes then let it depressurize for about another 20 minutes. And during that time, I can prep any sides we’re having as well as any taco toppings I want. Easy peezy.

So, we’ve covered one major part of this recipe, the whole salsa chicken situation. The other half of this is the tortillas. We get them from Tortilleria San Roman. It’s a tortilleria here in South Philly located in the Italian market and they are awesome. They make a ton of other delish stuff including sopes, tiacoyos, chips, pico, nopales and so on. If you’re in Philly be sure to stop there, the smell when you walk in is intoxicating. They’re so good that Ry insists on stopping there to pick some up after work anytime we need them. So I can’t stress the importance of the tortilla enough, wherever you are, find yourself some great tortillas to make this with. It’s imperative. 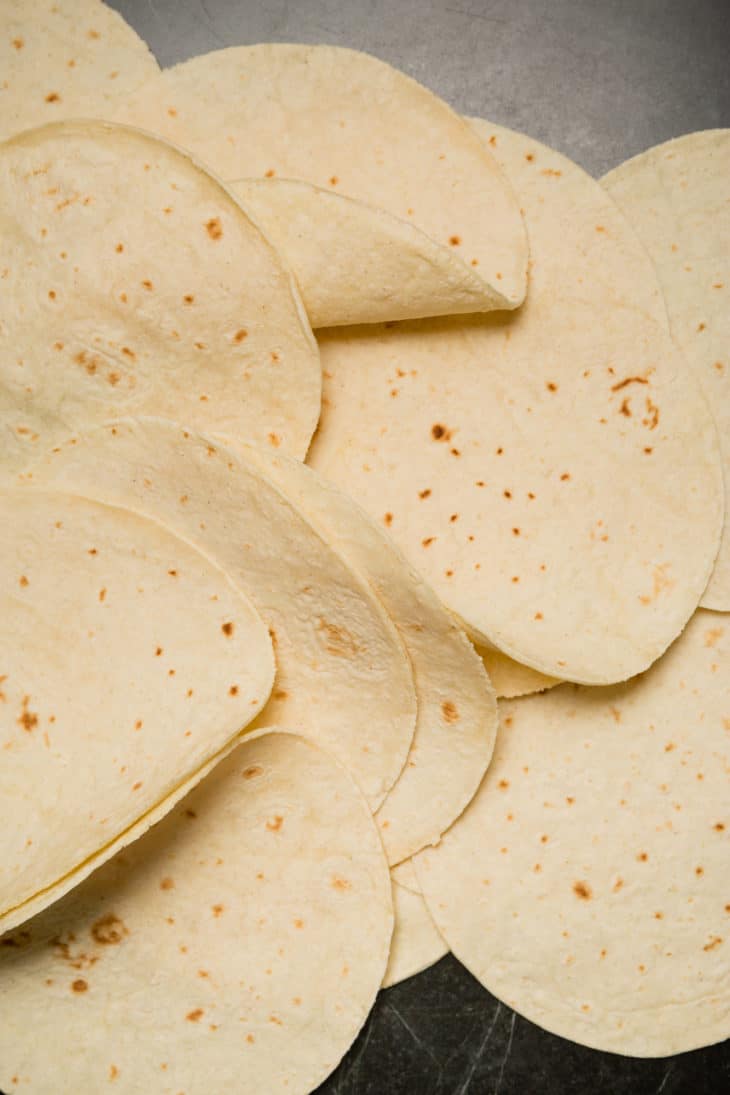 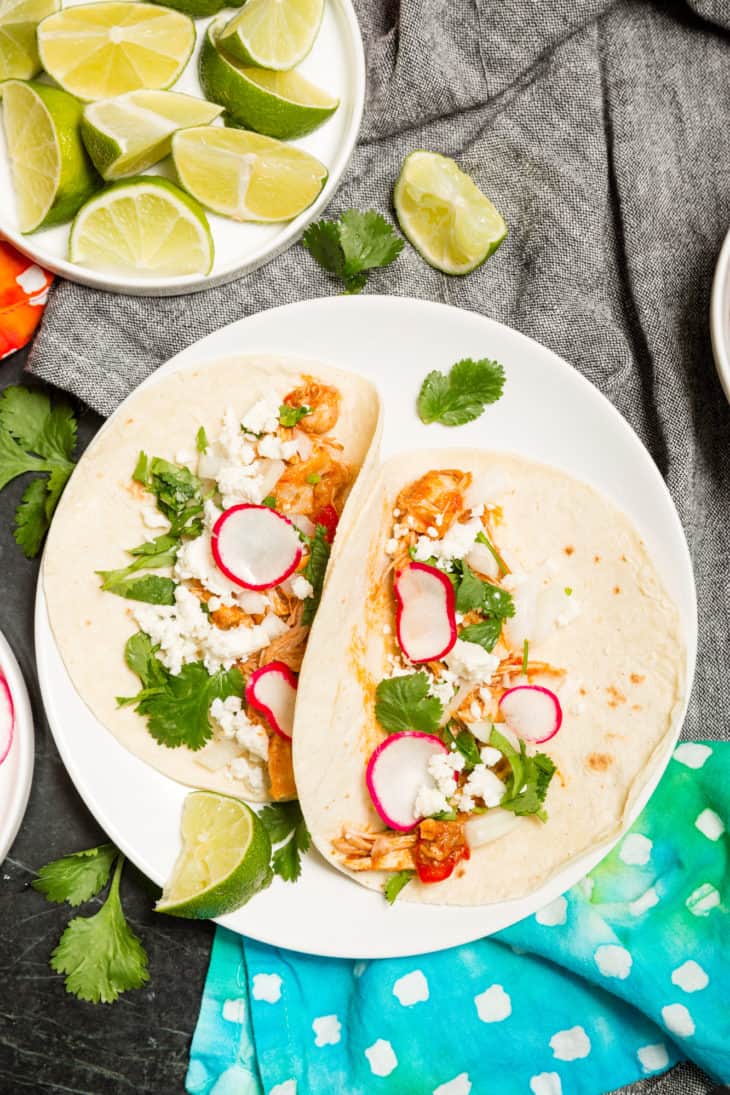 So I can’t stress the importance of the tortilla enough, wherever you are, find yourself some great tortillas to make this with. It’s imperative. 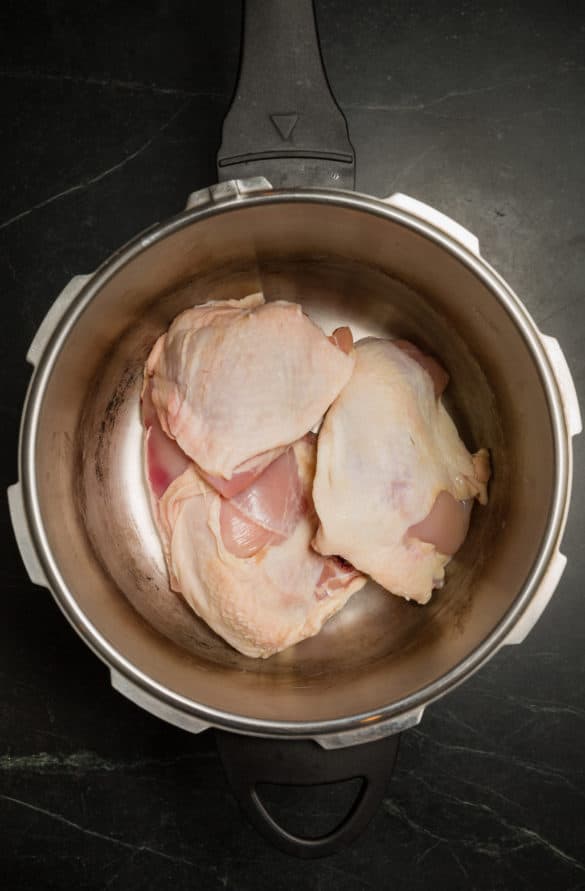 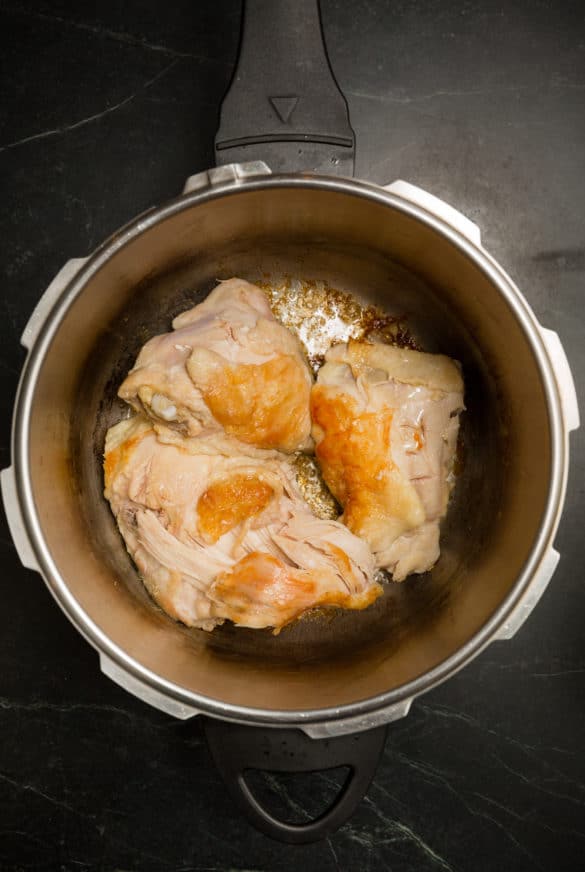 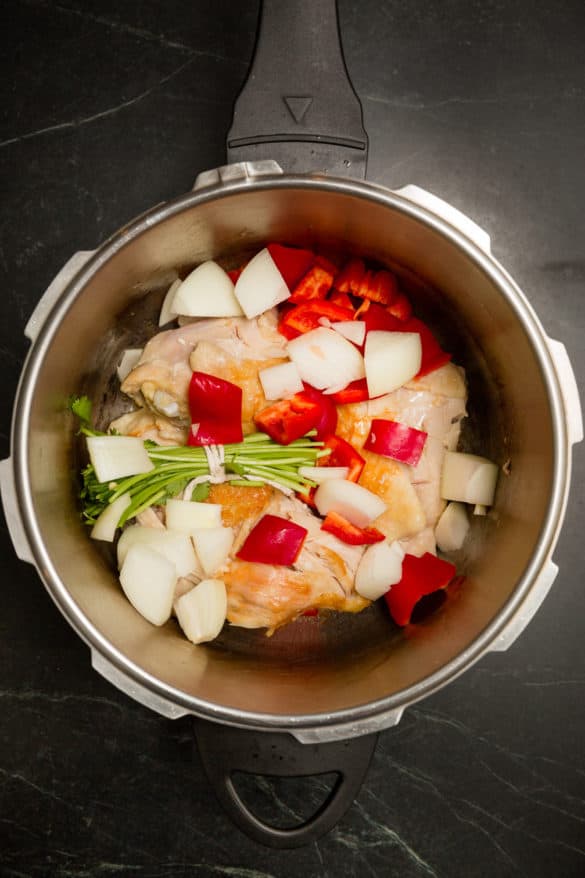 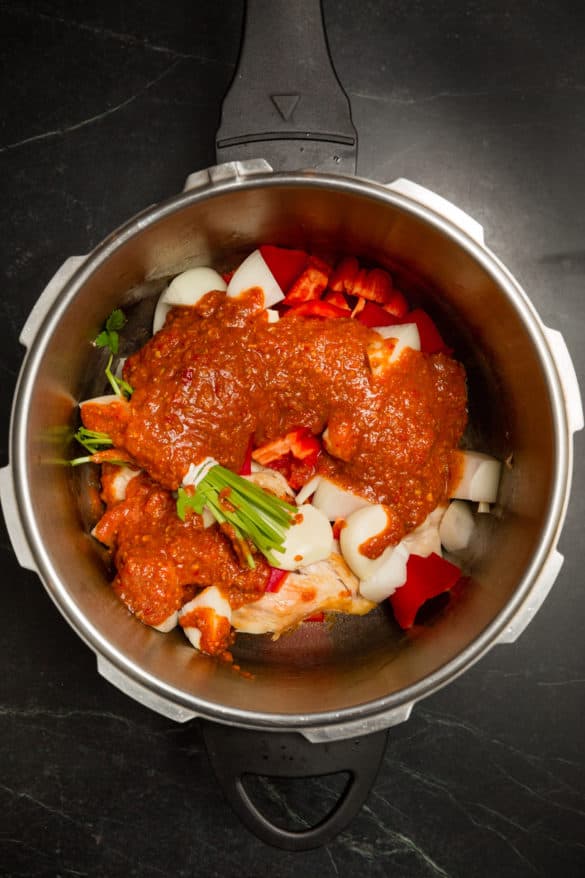 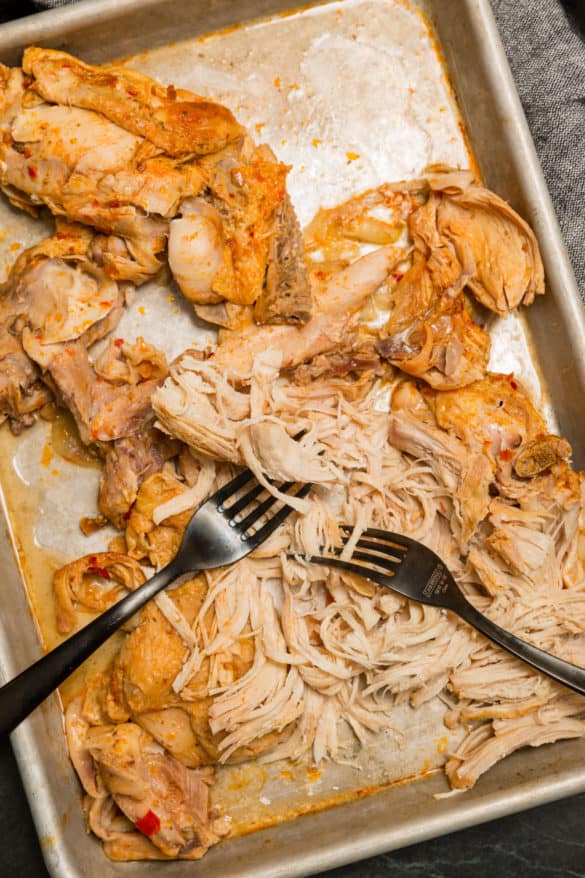 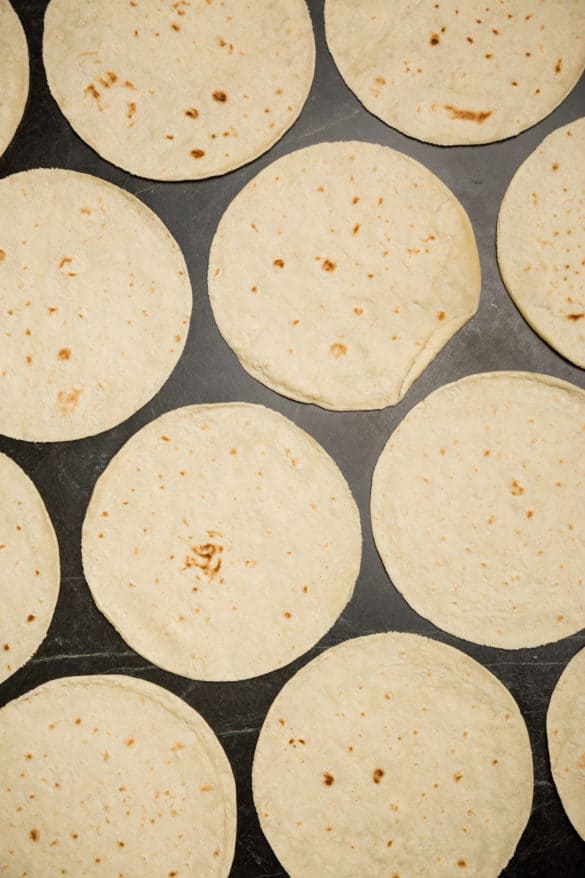 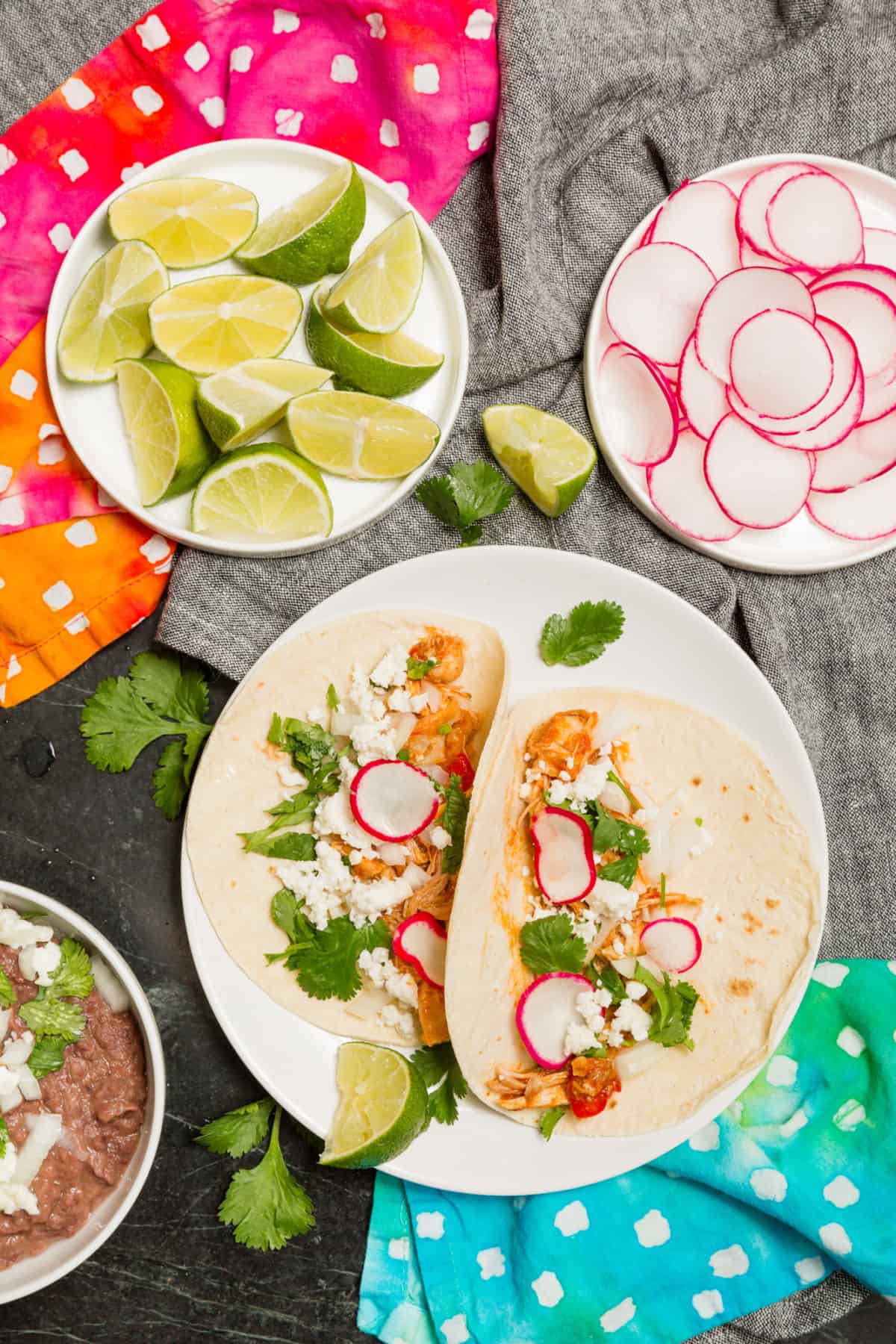 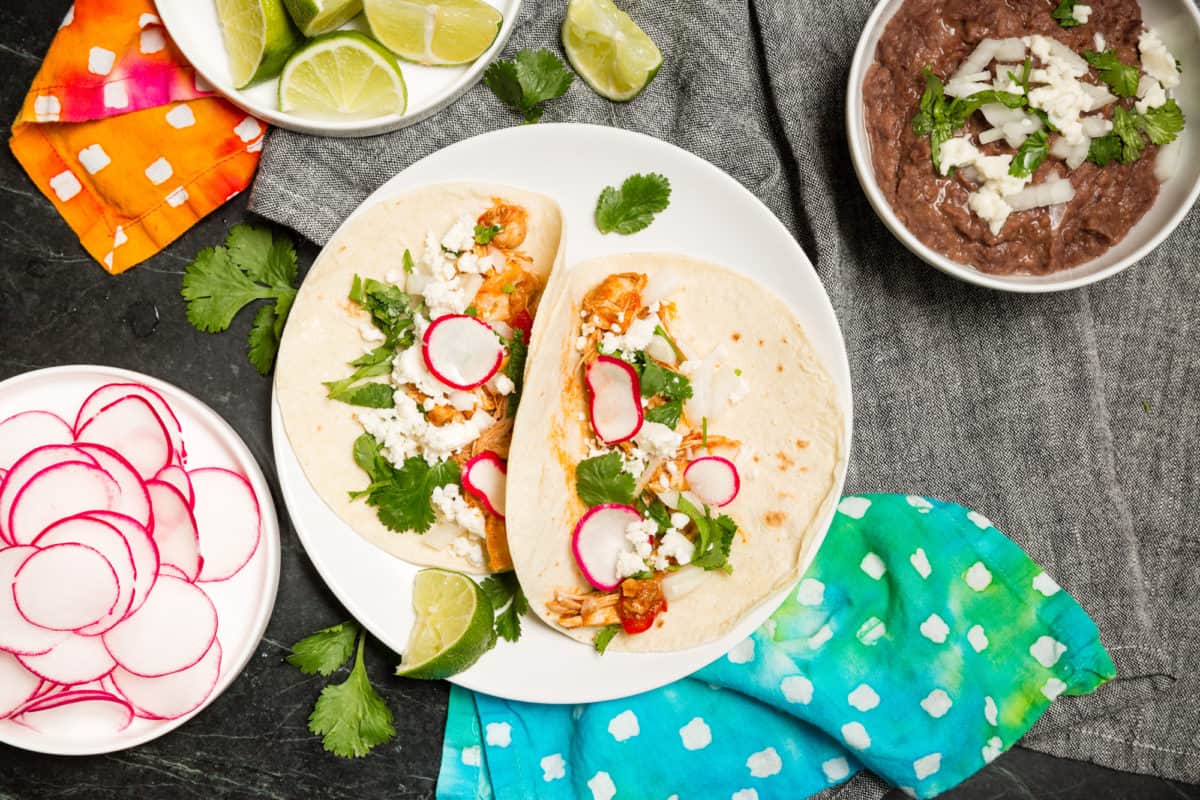 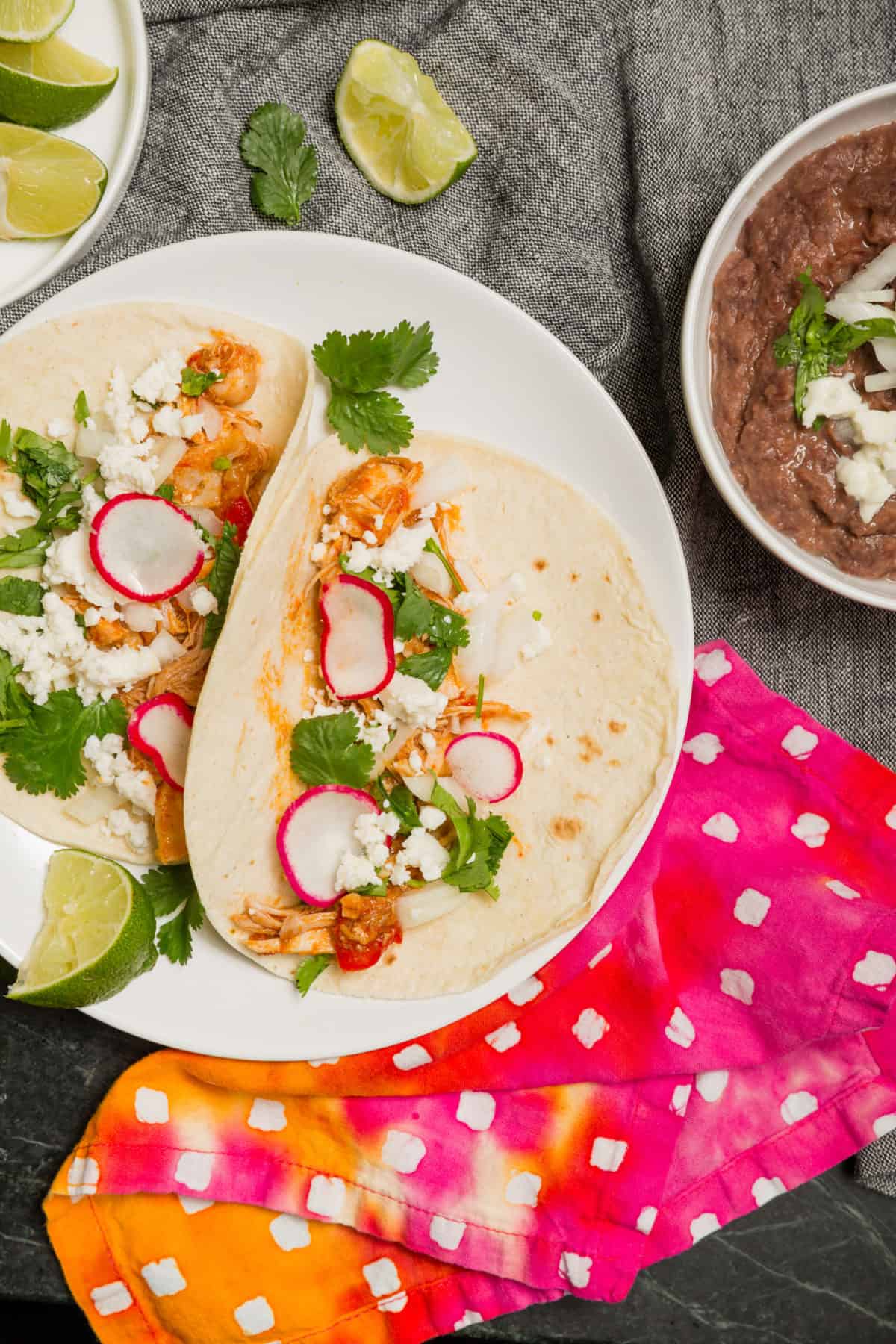 This is mainly just a method. You’re basically slow cooking, or pressure cooking, some chicken with some sauce. I’ve used some green or red enchilada sauces from a can before and it’s been delicious, but I do recommend the American Spoon stuff. Just get a good sauce that tastes good on its own. If it tastes like **it before you add it in with the chicken, it’s not gonna taste any better after it’s cooked. Just trust me on this.

First up, the chicken. Season it with some salt and get it browned up in a large pan, or my preference, a pressure cooker. You don’t need it fully cooked or anything, just get some color on it for flavor. Once it’s browned, you can go ahead and add in your chopped onion, diced pepper, cilantro stems and that salsa. Then just barely cover it with water, put on a lid and let it cook, for a while. In the pressure cooker I let it go for about 20 minutes, then let it release naturally. If you’re cooking it on the stovetop I would let it cook, covered, for at least 45 minutes at a low simmer, an hour would probably be better. Just make sure to check on it every now and then to make sure all your liquid hasn’t boiled away and nothing is burning.

You’ll know that chicken is done when it’s just about falling apart. It should easily fall off the bone, if that’s happening, you’re good to go. You can then go ahead and remove it from the pot and let it cool slightly. You can also go ahead and remove that bundle of cilantro stems, they have given all they have to give. Without them I don’t think I could live. (That was a BSB reference in case you missed it!) All boybands aside, you can then go ahead and let your sauce simmer and reduce, if needed, while you get all your toppings situated, shred that chicken (get rid of any bones) and get your tortillas warmed up. I like to put em over an open flame on the stove for a few seconds on each side.

The final steps are making sure to taste that sauce to check for seasoning and adjust as needed. Then go ahead and add that chicken back in, stir it all up and then get to eating those tacos. I trust you know where to take it from here out. Eat up! 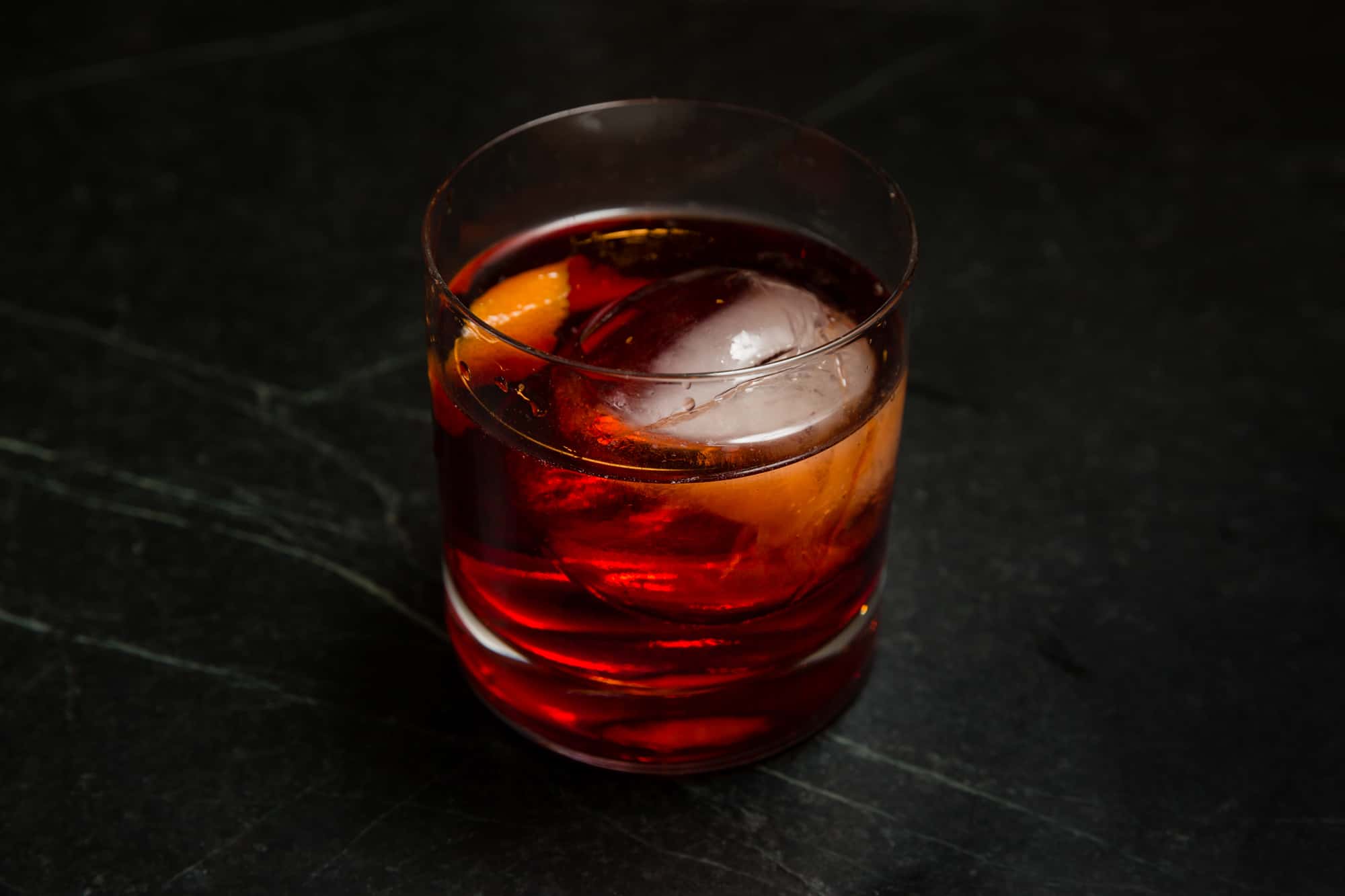 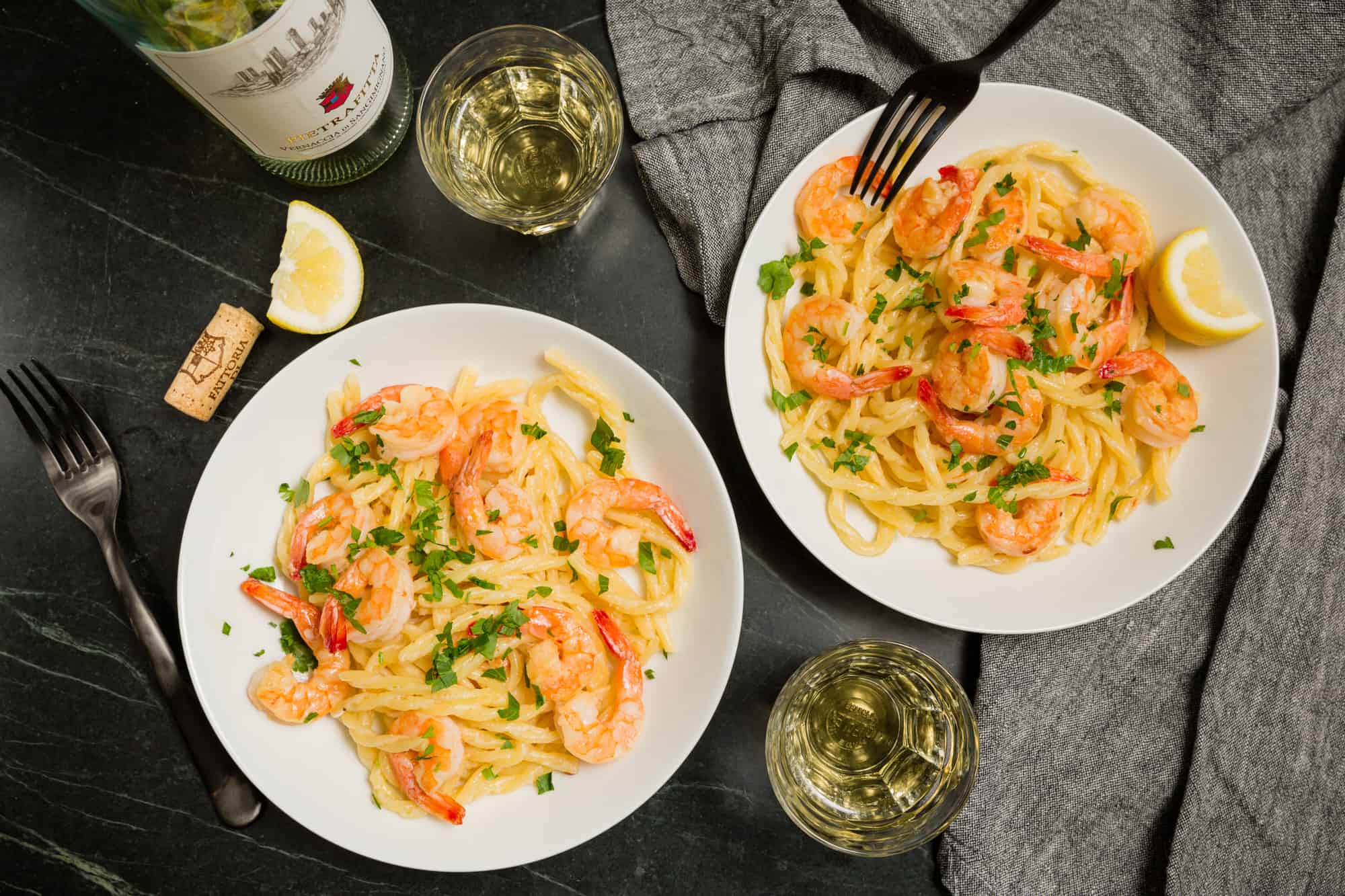 Our neighbors made us pasticcio and I am not mad a

I know you like a raffle! @protest__project is hav